40 layers of the Soul course and an unexpected birthday reunion

Usually I give courses on Fridays, but since the fourth of May is a special day in the Netherlands because it’s the day al the victims of World War II are remembered, I decided to give “ The ins and outs of the 40 layers of the Soul’ yesterday. The energy of connecting and making right choices combined well and supported the course energy and content perfectly.

Although I already gave 4 courses this year in my new working space, I simply had no energy and time left to write about them. Though they were quite interesting, a Healing hands for beginners, a Healing Hands advanced, two Specials about the spine and urogenital system and emotions and now The 40 Layers. Quite a lot.

But since I just moved here and had some reconstruction to do in my house as well as in my practice and also have a large yard now that needed plants and attention, I’ve been focussing on my clients, the consults and courses and not on writing. Until now.

Yesterday was an interesting day because ‘sound’ was a common thread too.

One of the participants was deaf and he brought an interpretor. She wrote everything that was said down, literally, and all the participants will receive a copy, a nice gesture so they have that in addition to my books and elaborate course materials more than enough

information to look up 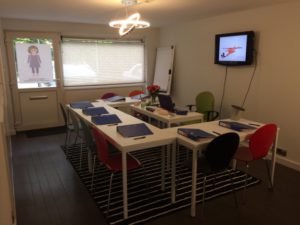 What I didn’t realize beforehand was that, although I’d worked with deaf people using a translator that used sign language before, a writing translator types and the strokes on a key board create sound. Sound that can annoy other participants. And so it did.

So we started by rearranging the whole course setting and kicked off. Just shortly after that, the outside noise started.

I recently moved to a street with the most beautiful large trees. The red beech in my front yard for example is over 40 years old and showing. It’s a huge tree. But trees also mean leaves and they need to be removed from time to time. 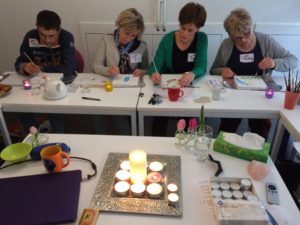 Not that someone told me so, I simply assumed. And so I fell in the trap of expectations and duality: a situation which wasn’t what I had expected it to be, challenged me to let go of the resentment it created. What happened? A beeping and with blinking warning lights equipped car started to clean the street and pavement. Not just for 10 minutes, but for a whole morning. It caused a background noise that irritated and worried me;

of course I felt responsible for an optimal course environment, meaning quiet, but that didn’t help. So when we did one of the exercises, a meditation in layer 18 – duality and one-ness – it wasn’t just for the participants.

After lunch the car was almost ready. And when it finally was, it switched places with a neighbour that carved stones. Tsjing, tsjing, ktjing. So the rest of the afternoon we were accompanied by another noise. Interesting.

Luckily the course went great., the content fitted and supported the processes, the exercises worked, and participants were positively surprised by everything they learned. They left happy and fulfilled, so they said. 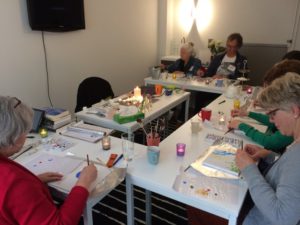 Afterwards I went for a walk in the woods with birthday dog Senna, my Labrador that turned 10 that day. Walking there we met a man with two labs of his one. We started chatting, as dog lovers do, comparing statures, grey hairs and characters. I mentioned that it was her birthday and that she’d become 10. ‘oh, he said, ‘my dog too!’. ‘That must be Jona then’ I answered, since I knew that one of Senna’s sisters lived nearby. I live in this village for 7 years now and for 7 years I’m trying to spot her sibling. 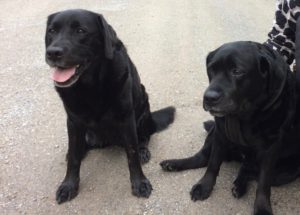 ‘And that must be Senna’, he said and we started to cuddle each others dogs even more. He told me that Jona almost hadn’t made it to her 10th anniversary. She recently was operated on her nose. A tumour was removed. I told him that I had had the same fear last week because Senna was operated on her mouth, because of an abscess that didn’t heal. 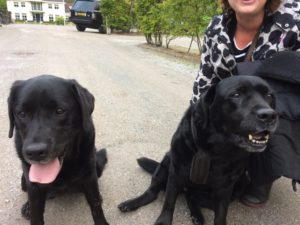 Of course with this knowledge in the back of our minds, we both were extra happy to meet with our grande dames, almost 10 years since they last saw each other.

We decided to use this photo opp, so at the left you can see Jona, at the right her oldest sister Sen. Of course they are both beautiful, lovely, caring, funny and playful dogs, but as you can see for yourself Senna is the sweetest dog on the whole wide world and far beyond, as I often tell her. To the moon and back isn’t far enough. Far beyond it is. 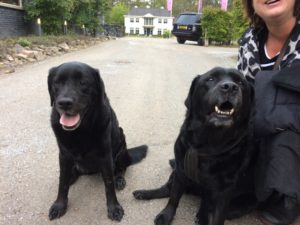