Now and then, when the situation requires it, I work with my personal version of Family of Organisational Constellations. This way of working was founded by Bert Hellinger and after I’d followed some courses at the Dutch Bert Hellinger institute, I developed a way of working, combining systemic work and aura healing.

In a constellation a family (organisation or other group) is represented by representatives. They’re put in the space by the person who’s asked for the constellation.

Then the members start to respond (in my opinion, Mr Hellinger gave no explanation for it, but I’d like to) to the energy of the original people and, in a way, channel this energy and thus channel the problems. The dynamics in the group of representatives mirrors the family dynamics so you can learn a lot from it just by watching it. The change in those dynamics is the result of the interaction in the constellation.

My way of working with is different. I used to heal the blockages from representatives in a constellation and thus clean up all the relevant issues in the system. But, that meant that I worked on all the original family members as well as in all the auras of the representatives. That costs a lot of energy!

Nowadays I use large puppets, sticker them with the name of the person the represent and place them in the room. I read the energy of the group (family or management team or other group) and then I ask the client to take the place of a doll. Then I work in the aura of the representative and scan for the mutual blockages and work on those. Systematically I work through the whole group, using the aura of the representative instead of the (often) deceased people, and it’s ready when all issues that were important are cleaned.

So, in a way, I work as a catalyst. I remove blockages that prevented a group from evolving and thus speeding up the process.

This week I had a client who asked: ‘Is it possible to sit, while you are working? I’m rather tired.’ “Why not?’ I thought, since in my way of working someone doesn’t need to stand and feel everything for himself, I read the information for him. So I put him on a chair and moved him around, whenever he needed to represent someone else. 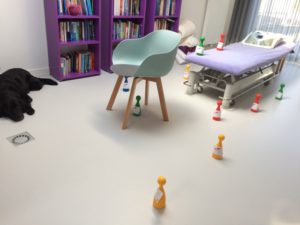 So, I just invented the constellation for very lazy people!