Since a year I’m recovering from tears in my hamstrings and knee, after falling down the stairs. Of course I also have been healing myself on a soul level and energetically working with the pain and the traumatic origin, but still I had trouble walking and moving.
Time for another visit to a doctor. The orthopaedic doctor I saw half a year ago didn’t really shed any light in the situation, so this time I went to a sports physician arcoxia 90, a member of the PSV team, the soccer team. A pity it was PSV, but nevertheless a good doctor.
Two MRI’s later the remaining issues became clear and I started looking for another physiotherapist, one specialised in my current problems.
And since it’s an injury that originated from a trauma the day before, I wanted to go to someone who looks at it from a holistic point of view.
Holistic means from all angles. So I found myself filling in 8 forms and watching a movie to prepare. And found myself in trouble again, with the fourth questionnaire. A psychological evaluation test.
Question 16 was: Do you ever hear voices that no one else hears?
Hmmm. Well, yes. …But I can’t say that out loud, I thought. Then they want to admit me to a psych ward because they think I’m a lunatic. They will never take me seriously.
So I tried to lie by omission. Not really a lie and in Dutch that expression doesn’t even exist so no lie at all. 🙂
I just skipped the question.
But in the end when I tried to save the questionnaire, the system was harsh. ‘You haven’t filled in question no 16. Do you ever hear voices that no one else hears?’
There was no way around it. I needed to be honest. And let go of my mistrust. So I bravely filled in: YES!
And sent an email afterwards saying that I work as a medium and that’s it’s part of the job to talk to dead people and that I thus hear voices. That there’s no need to send an ambulance and admit me in a hospital, that I’m completely sane. Except for my leg that is, and that I would like some help with that.
To be continued… 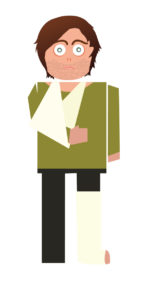