Today I gave another course Healing Hands 2, (learning) to heal the aura. This time I wasn’t in France but at the usual address, the Oude Wandelpark in Valkenswaard, in the Netherlands.

During the introduction where everybody shared his background and his course goals, it already became clear that the universe had brought this group together for a reason.

Three out of eight member had suffered brain damage (2 coma’s and a concussion) resulting in needing a navigation system to drive where ever they went, even the normal daily routes home or to their work. Amazing.

Another common theme was: how do you find your way back/ find yourself a new way in life after a severe illness? Or how to deal with the fact that you’ve become an outsider?

Another match was the theme: how to put words to what you feel? Feeling is hard enough as it is, but describing those feelings seemed almost undoable for some. So, not only the Healing Hands basics as: how do you find a blockage in the aura? And then what do you do? were dealt with, there were a lot of interesting side-tracks that sometimes even became main roads for a while.

The most important side track happened during the lunch break. A hot tea accidentally was spilled on one of the participants, causing a lot of pain and of course, wet clothes. We combined our forces: the normal things that you do in those cases, take the clothes of, cool the burns with water and ice and heal the trauma directly in the aura. The quickest way to heal on all levels at once.

After this first aid session it was good to see how this event led the participant to let go of a lot of underlying issues when she was the guinea pig for one of her colleagues during a healing session that followed.

I enjoyed the faces of the group while working and finding out what ‘following the energy’ really feels like. And I was really happy to hear their reactions afterwards: ‘great’, ‘weird’, ‘a revelation’ and ‘intense’. I think they got infected with the pure energy bug. No tricks, just follow the energy and let the client lead the way. You’re ‘just’ the instrument. It was awesome. 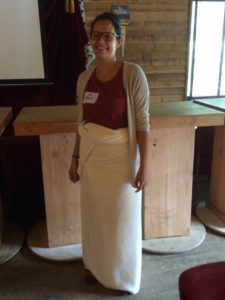