Author and Healing Medium Annemiek Douw shares her optimistic view on being harassed by dead people: They give good feedback and offer a chance to grow and heal.

Do you know the feeling? You’re sitting next to someone at a birthday party and start to get really, really tired. Within seconds your energy level drops and you just don’t know why. Perhaps you tell yourself you should have gone to bed earlier the night before, or that you shouldn’t have drunk so much wine because you always get tired when you drink alcohol. Perhaps you even notice that the reason you feel like you do is the company you keep and you realize that, because your aura overlaps that of your neighbour, he’s the one that’s costing you so much energy (you can read more about the aura in my previous blog Your Aura).

And maybe it’s even more complicated and you have an uninvited visitor in your aura. A ‘hitchhiker’ so to speak.

What Is An ‘Aura Hitchhiker’?

An ‘Aura Hitchhiker’ is what we healers call an entity and is actually a soul who has passed away. So he’s dead and his soul has left his body: the jacket he wore when he was still alive. Since he took that jacket off, he’s just a little cloud of energy that has not yet departed earth. So his spirit is still here. Normally we don’t really notice wandering spirits, but sometimes they cause trouble. Then they are called hitchhikers, ghosts or unwanted visitors.

Most of the time entities are not aware of the fact that they are already dead. It’s like Bruce Willis’ character in the movie The Sixth Sense (‘I see dead people’), he didn’t realize that he was already dead and ‘lived’ as he had always done. That’s what entities do: they live and are stuck in their situation and they sometimes repeat the same patterns they had in life. They walk their usual walk. They sit in the chair they always sat in. They do all of that without a physical body but they aren’t aware of that. It’s like phantom pain when the patient still feels his missing limbs and feels like he still has them. To the ghost, his body still feels real.

Why Entities Stick To Earth

Although entities are dead, they remain earthbound for a reason. Some of them feel as if they are not worthy to go to the Light, to God, to Heaven, to the next Phase, Other Side or whatever you like to call it. They sometimes think they did something wrong and should be punished for it, or they believe in Hell and therefore don’t see the way to go to the Light even if it’s right in front of them. So they shut their eyes, keep their heads down, don’t notice the help around them and stick to the earth.

Or they were atheist and didn’t believe that there could be an afterlife and they need time to process how it really works.

Sometimes, when it’s a young child who died before his parents, he wanders because he was told never to walk with strangers. And because his parents are not there to accompany him, he waits for them and this way the child gets stuck.

Every person that dies, leaves his body in a certain state of mind. Some people are completely at peace. They are relaxed, knowing that they are done with this life and, although they are perhaps sad to leave their loved ones for the time being, they are happy to move along.

Others die in an accident. A car crash for example. In an instant their life is suddenly ended and they don’t have the time to realize it and to decide to just go with the flow and find out what comes next.

Some die very angry: angry because they got ill, or were killed in a gun fight, or murdered by their spouse or just plain angry because they’d felt so lonely for such a long time. People experience different emotions and when your emotions are still very strong when you die, it may influence the path you choose to take next.

So entities have a certain history, personal thought patterns and most of them are very emotional. In life they were angry, frightened, fearful, nervous or very busy or tired people and in death, they remain the same. After all, they’ve just taken off their jacket.

And just as when you’re alive you choose your company wisely and select people with the personality and energy that suits you, in death, entities do the same: like a polar bear jumps from ice floe to ice floe in order to find the best spot to stay, an entity jumps from aura to aura, trying to find the host with the best matching energy.

And because he no longer has a physical body, he feeds off the energy of the host. Like a foetus is fed by its mother, the entity is fed by his host. So he’d better choose a tasty one!

Why Does an Aura Hitchhiker Stay With You?

When he’s found his host, two things happen: the hitchhiker sticks to the host’s aura and the mood of this host changes.

The sticking is a result of resonance: the energy of the entity is similar to a blockage in the host’s aura, so they stick together (you can read more about this here). In physics this is called cohesion: the attraction between two molecules of the same type. And this attraction is stronger than the attraction between two molecules of a different type (adhesion), so the entity sticks more easily to a person with a similar energy than to someone who is really different, therefore the entity will always look for the most suitable host.

And when the energy of the entity attaches to the energy field of the host, it reinforces the blockage that was already there and the result becomes clear: a quality that was already present will become more apparent. So an angry person may become aggressive, an emotional one may more easily burst into tears and a tired person can feel as if he might instantly fall asleep. 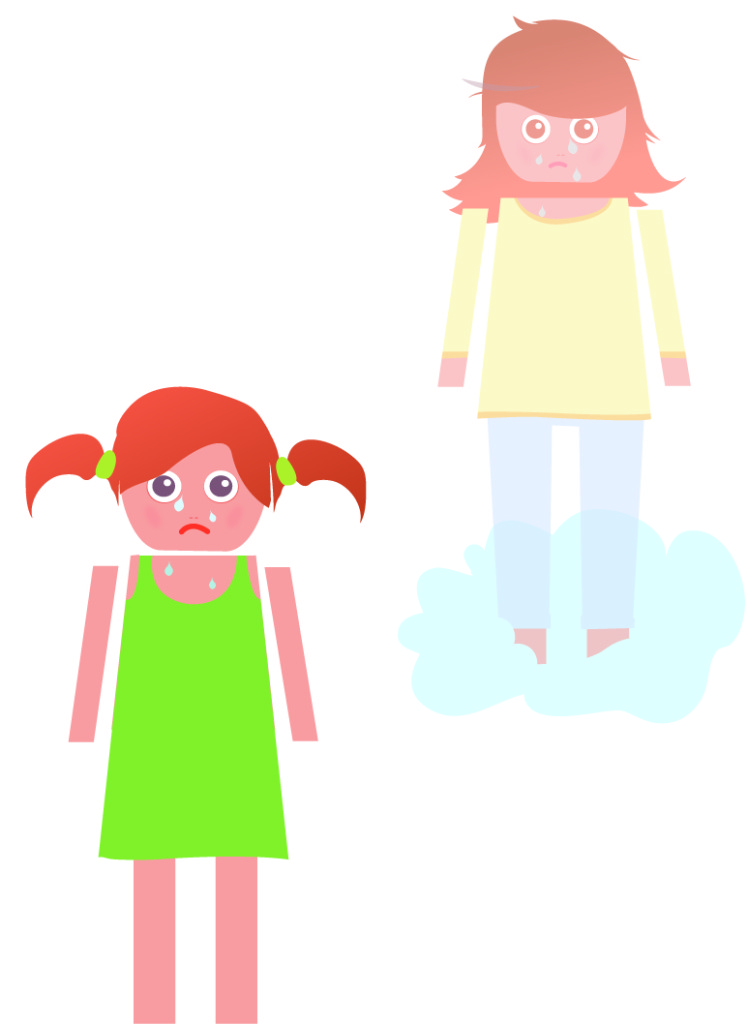 So now you know the influence an uninvited hitchhiker might have, you probably don’t see the upside of his stay yet. I can imagine you might find it a bit unpleasant to realize that something can stick to your aura without you even noticing it and influence your mood or thoughts.

The presence of the entity is, in a way, feedback for it can only stay with you when there’s a blockage: a problem in your aura. Without meaning to do so, it shows you that there is a problem that you can solve before it gets worse.

If you find out that you were, in fact, very angry with someone, it gives you the opportunity to talk it over and clear the air. If you become very tired, you might take some rest. So an entity helps you discover what you need for yourself, to heal certain aspects and live your life to the fullest.

If you realize that you have an unwanted visitor, and you aren’t a medium and can’t communicate with him, you still can communicate to him.

Simply explain to him that he is dead now. Tell him to wiggle his toes and he will find out that there are no longer toes to be wiggled. Please assure him that nothing that has happened during his life is a reason to stay earthbound, because without a body he can no longer do anything about it. You can tell him to ask his deceased loved ones for help. Especially when an entity feels like he is not worthy to go to the Light, it may help when he sees other souls that he can trust. Then he knows it is safe to go and will follow them.

Also the young children waiting for their not yet deceased parents need the help of other deceased relatives to pass and go to the Light, so please just explain the situation to them and they will leave in an instant.

In this way, both of you benefit from the experience: you grow as a person and become more at ease and the issue you had that attracted your hitchhiker in the first place is dealt with, so you will not unconsciously invite similar visitors in future. And the entity is helped to go into the Light, leaving his human worries behind.

Read more?
Of course there are also other beings that don’t have a physical body: angels, guides, deceased loved ones, ET’s. I will elaborate about how I work with them in future blogs so please subscribe to it, if you are interested.

And if you would like to read more about entities and the way I come across them in my practice as a healer and would like to discover what feedback their presence might give you, you will find ample examples of clients and ‘their’ entities in my upcoming book 21 Layers of the Soul: Healing the Karmic Ties with Friends, Lovers, Family and Enemies contains loads of real life cases, which had their origin in Previous Times. 21 Layers of the Soul is out now. Alternatively, the Dutch version is available here. ← 21 Ways to Grow as a Soul
Have We Met Before? How Previous Lives Can Impact the Present →

2 Responses to The Upside of Unwanted Aura Hitchhikers